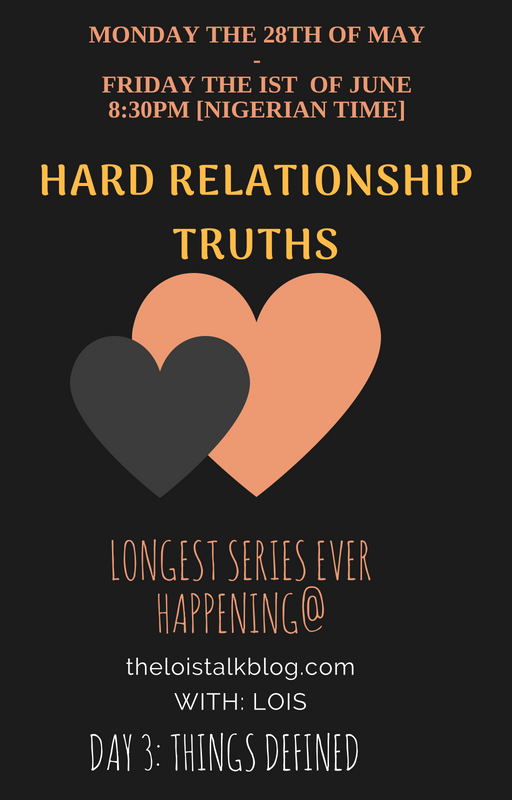 Heeeeey people.. So in continuation of yesterday, kindly read up just in case you missed it – https://www.theloistalkblog.com/single-post/2018/05/29/HARD-RELATIONSHIPTRUTHS-2

Let’s break some things down that were said towards the end of the last post. Our generation does not understand the meaning of vows” and we lack the patience for it. Truth be told, only God can keep relationships because they require wisdom from above. I sat down and I was thinking about my family and I’m like “DAMN!!!…Marriage is a whole lot” and yes it’s scary really is but that’s why it’s a process because in it are things to learn that’ll improve your growth. That’s why you have to take it one day at a time and be conscious of the lessons each day brings.

A lot of people are unfulfilled in their marriage because their partners changed over the years “To every action, there is an equal an opposite reaction” Newtons third law of something…lol… That’s why God cannot be left out because with Growth comes change and change is inevitable. Hence wisdom is key…you need the right step to take.

However, some people are so scared of commitment..I mean, nobody wants scandals and scars in their lives so some would rather just give birth outside wedlock and tell themselves love is not for them..After so many heart breaks. While others, life happened to them..they say (Doesn’t mean you still can’t find love and live a fulfilled life).

I think the most worrysome of all these categories are the never ageing bachelors and spinsters. I see majority of these people as people that have experienced it all. That’s the problem of too much information. It can be likened to having a clue on every option so there’s nothing to interest you basically. I’ll explain..Imagine a lady dating a drug addict..thinking..she could change him, the moving on to an accomplished man.. and the list is long.

Along the line, she becomes extremely independent. In most cases, the chances of marriage can be somewhat slim because she’ll have the feeling that she has all she wants, submission will be far from her so what new thing are you bringing to her table. It’s easier for a guy to scale through this because he can just SETTLE down but a woman will want her emotions to be involved.